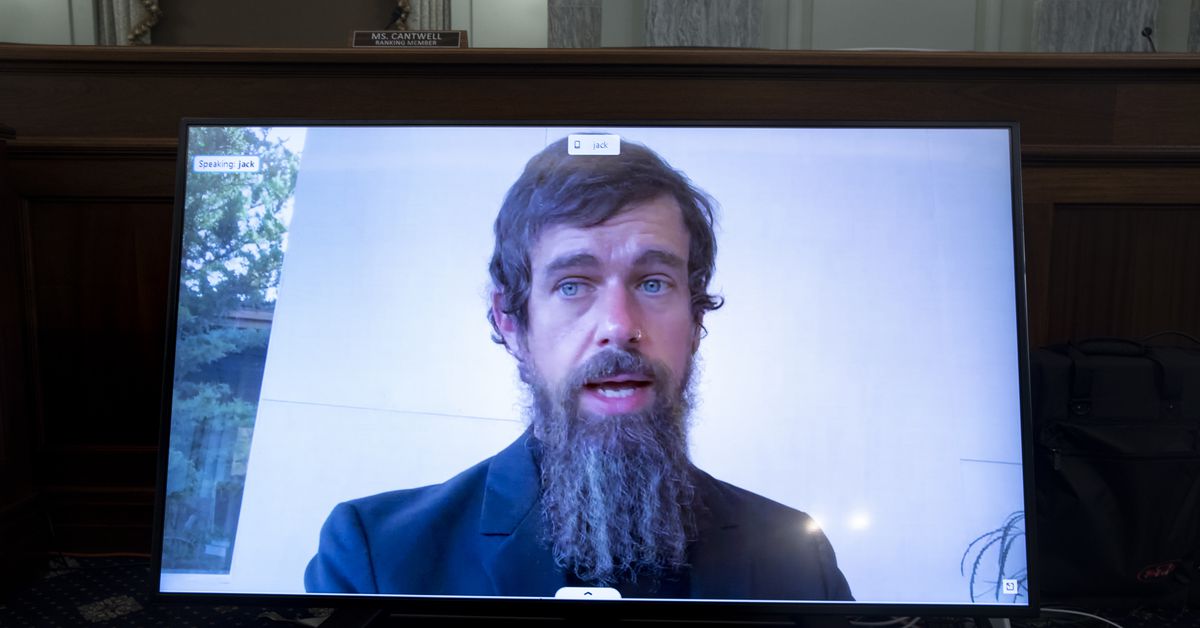 Six days ahead of a historic presidential election whose outcome is expected to shape the future of US democracy and as Congress delays passing a new economic stimulus deal to aid millions of unemployed Americans affected by the ongoing pandemic, the Senate spent more than three hours talking about something else: how social media companies handle controversial speech on the internet.

Wednesday’s hearing was supposed to focus on nuanced reforms to a landmark internet law — Section 230 — which shields tech companies from being sued for content users post on their platforms. Both Democrats and Republicans have been calling for years to reform this law, arguing that it is outdated considering how large and powerful these tech giants have become. That’s why the Senate Committee on Commerce, Science, and Transportation subpoenaed Facebook CEO Mark Zuckerberg, Google CEO Sundar Pichai, and Twitter CEO Jack Dorsey to face questioning.

But instead of talking about reforming the actual law, most Republican Senators — with notable exceptions such as Sen. Shelley Moore Capito (R-WV) and Sen. Deb Fischer (R-NE) — used their time to press the CEOs about specific content moderation decisions that have been controversial with Republicans. Namely, Twitter blocking an unverified story in the New York Post making damning accusations about Hunter Biden earlier this month, or why the company fact-checks Trump more often than Iran’s or the Chinese Communist Party’s leaders.

Some Democrats at the hearing — and many outside observers — have written off the hearing as political theater orchestrated by conservatives days ahead of the election to intimidate these companies so they avoid fact-checking Trump or conservative disinformation campaigns.

But Republicans argued that allegations of bias are critical and valid, and that they need to be swiftly addressed.

Many Senators used assumptions and cherry-picked evidence to try to prove their points. And in response, the tech CEOs effectively skirted more serious discussions about their actual shortcomings in content moderation.

Here are the fact-checks on the five most head-scratching claims senators — and tech CEOs — made at the hearing.

Many conservative lawmakers, encouraged by President Trump, have long alleged that tech companies are censoring Republicans on social media. And today’s hearing was no exception.

Citing social media companies’ handling of the Hunter Biden New York Post story, as well as Google’s threats to ban conservative news website the Federalist over allegedly racist content, Senate Commerce Committee Chairman Sen. Roger Wicker (R-MS) said in his opening remarks: “These recent incidents are only the latest in a long trail of censorship and suppression of conservative voices on the internet.”

While it’s true that Twitter and Facebook have made some controversial and at times questionable decisions to limit false or unverified speech by conservative politicians and news outlets (Twitter reversed its stance on blocking the Hunter Biden story, Facebook did not), these are individual examples.

On the whole, data shows that conservative content thrives on social media. Conservative pundits like Dan Bongino and Ben Shapiro consistently rank among the most shared news sources on Facebook based on the company’s data aggregation tool, CrowdTangle. And despite all the hoopla about Twitter’s alleged censoring of Trump, the president still uses the platform every day to reach tens of millions more followers than Joe Biden does.

In fact, Trump himself has repeatedly stated that, without social media, he wouldn’t be able to “get the word out” to the people.

Republican senators asked why tech companies haven’t fact-checked high-profile Democratic leaders like Biden as much as they have Trump, but they ignored the very obvious answer: that Trump, unlike Biden, has more frequently promoted false and misleading statements on social media. If Biden were to attack mail-in voting or the basic science behind Covid-19, as Trump has, he would likely face the same kind of moderation.

To Republicans’ credit, an underlying tension here is that many people who work at tech companies lean liberal (more on that later). And, back in 2016, Gizmodo reported that those political beliefs sometimes trickled into low-level employee content moderation decisions via the disastrous “Facebook Trending” section. But a lot has changed since then (for one, Facebook has done away with that its trending section entirely). If anything, the evidence now seems to suggest that Facebook has adjusted in the other direction to please Republicans and fend off claims of anti-conservative bias. According to recent reporting from BuzzFeed News, NBC News, and the Wall Street Journal, the company has at times overridden its fact-checking system and tweaked its algorithms to favor conservative publications over liberal ones like Mother Jones.

2) Ted Cruz claimed social media companies are the biggest threat to free speech in the US. That’s not at all clear.

Sen. Ted Cruz (R-TX) came in hot to the hearing, announcing his intent to grill Dorsey in a wrestling-match style flyer he (ironically) tweeted out the night before the session, all in the name of defending free speech on the internet.

“The three witnesses we have before the committee today collectively pose the single biggest threat to free speech in America and the greatest threat we have to free and fair elections,” Cruz said, speaking about Dorsey, Zuckerberg, and Pichai.

Cruz is entitled to his opinion, of course, but it’s not at all objectively clear that the biggest threat to free speech or election integrity in this country is when Facebook, Twitter, or Google fact-check politicians like Trump.

In fact, if you asked this same question of leading free speech advocates and human rights organizations, many would say a bigger concern is Trump’s sustained and increasingly vitriolic attacks on the free press since his first day in office. If social media companies do pose a threat to free speech, they say, it has less to do with how they handle conservative voices and more do with the extremist hate speech that spreads on their platforms, and which has a chilling effect on women, minorities, and other marginalized groups by shutting them out of online public discourse.

It’s true that social media companies now rival governments in the scope of their power and influence, and free speech defenders of all political persuasions demand that these companies provide more transparency and accountability about what content they do and don’t allow.

But for Cruz and some of his Republican colleagues to support free speech only when it suits their political needs (in an extreme example of this, Sen. Marsha Blackburn (R-TN) denounced Google for allegedly censoring Republicans while simultaneously calling for the company to fire a rank-and-file employee who publicly criticized her) is a hypocritical one at best.

3) Dorsey told Cruz that Twitter doesn’t impact elections. It does.

Despite Cruz’s largely theatrical political showboating, he did get into one important exchange with Dorsey that highlighted an issue originating with the tech platforms themselves: their refusal to acknowledge that they are more than just neutral platforms.

At one point, Cruz asked Dorsey whether Twitter has influence over the elections, and Dorsey said no.

Cruz retorted, “If you do not believe you have the power to influence elections, why do you block anything?”

Dorsey’s response was that Twitter blocks content to reduce harassment and make everyone feel included on its platform. Facebook and Google have similarly asserted that they aim to be neutral platforms for people to communicate, with exceptions to protect their users from harm. But that’s just part of the picture.

The reality is that Twitter, Facebook, Google, and every other social media platform make decisions every day about what kind of political speech is and isn’t allowed on their platforms. Moreover, the algorithms underpinning these platforms dictate which topics go viral and reach the masses instantly, and which ones get seen by a much smaller number of people. And because these sites are the main way tens of millions of Americans primarily consume their daily news, what is and isn’t allowed on them can of course impact how someone votes in an election.

The fact that Dorsey — as well as Zuckerberg and Pichai — wouldn’t admit this basic fact was telling of tech CEOs’ lack of candor about the political power they’ve amassed through their companies.

4) Senators suggested tech companies’ liberal employee majorities are a problem. But that’s neither illegal nor the government’s job to police.

First of all, let’s be clear that most tech employees at Google, Twitter, and Facebook lean liberal. That’s reflective of the demographics where these companies are based and the skills they hire for: largely college-educated workers in major urban areas like San Francisco, New York, and Seattle.

In Wednesday’s hearing, several Republican Senators questioned tech CEOs about the political makeup of their workforce as if there was something shameful about this.

The insinuation is that because these companies have a liberal-leaning workforce that they as a default are stifling conservative speech.

But as we mentioned earlier, there isn’t any real proof of that systematic suppression. And even if there were, the solution wouldn’t necessarily be to mandate that everyone who works for Facebook or Twitter pass some kind of political litmus test.

Congress has a dark history of blacklisting citizens from gainful employment due to their political beliefs. While it’s fair to question the unparalleled political power of tech companies and try to regulate that problem, it’s dangerous for lawmakers to misleadingly frame the issues at hand as being connected to employees’ personal politics.

Senators across the aisle repeatedly butchered the name of Google CEO Sundar Pichai. The soft-spoken Pichai, who was born and raised in India and worked his way up at the search giant from a product manager to its chief executive, refrained from correcting his questioners.

The fact that members of Congress were mispronouncing the name of one of the most important business leaders in the US was an embarrassing slip many observers immediately noted on Twitter. Especially as it was Pichai’s third time being questioned in front of Congress.

And while getting Pichai’s name right is a less important point in the scope of the broader issues at stake around social media, it’s not insignificant, either. In recent months, Trump and some Republican lawmakers have repeatedly mocked Democratic vice presidential nominee Kamala Harris over the pronunciation of her name. It seems more likely that in this case, senators were botching Pichai’s name out of ignorance rather than malice. But as BuzzFeed News pointed out, Congress hasn’t had any trouble pronouncing other hard-to-pronounce names in the past. In the year 2020, there’s really no excuse for elected officials not to at least try and correctly pronounce the name of a global tech titan.

Spaceflight does some weird things to astronauts’ bodies

A Dangerous Year in America Enters Its Most Dangerous Month

Health misinformation pages got half a billion views on Facebook in...

A new neural network could help computers code themselves