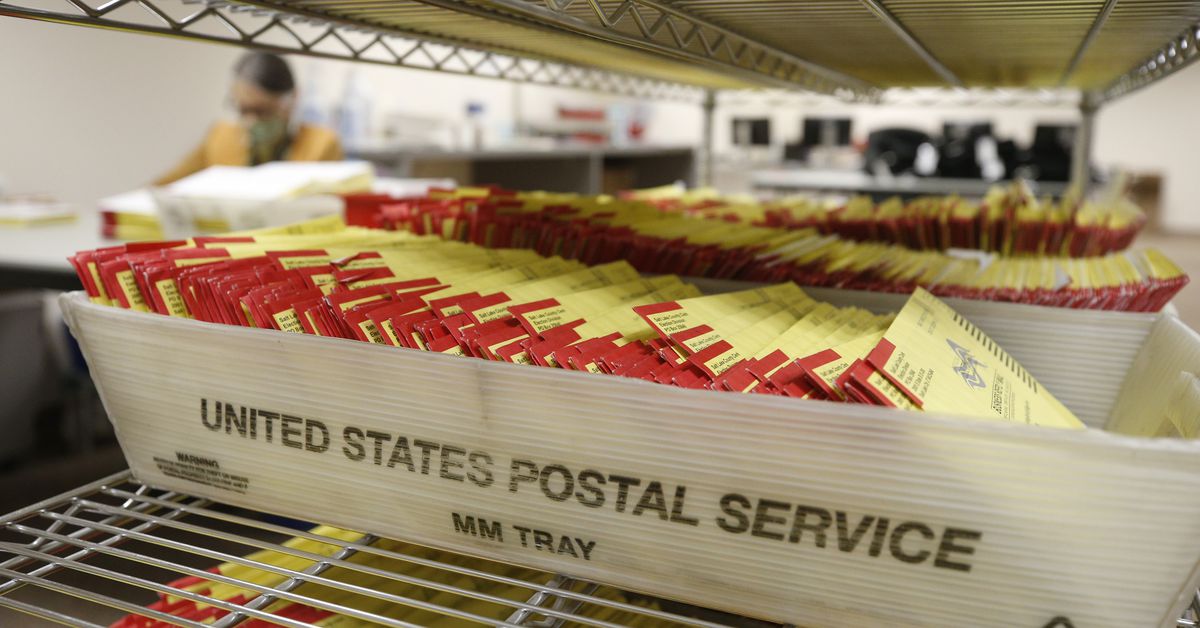 Several news outlets reported on Election Day that the United States Postal Service did not have records of delivery scans for 300,000 mail-in ballots across a dozen states, stoking fears that changes to the Postal Service implemented earlier this year by new Postmaster General Louis DeJoy, a top Trump donor, had potentially disenfranchised hundreds of thousands of voters.

But the president of the largest postal worker union corroborated in an interview with Recode on Wednesday morning what the Postal Service has repeatedly said about the data in court filings in recent days: There are numerous reasons why ballots in the days leading up to the election would not receive a delivery scan and that it’s highly unlikely that the number of undelivered ballots totaled anywhere near 300,000.

“Just because something didn’t have [a delivery scan] does not translate at all into ‘it was not delivered,’” Mark Dimondstein, president of the American Postal Workers Union, told Recode on Wednesday. (The APWU has previously been critical of operational changes DeJoy implemented earlier this year — and then put on pause — that its leaders say led to delivery delays.) “What we had in place … is the ballots were given such priority treatment, even beyond first-class treatment, that ballots were being purposely pulled out” of normal mail-processing procedures and given expedited delivery in the days leading up to Election Day.

Dimondstein outlined various scenarios in which a ballot could be scanned into a facility but not scanned for delivery. The scenarios typically involve ballots not running through a normal automated processing procedure and being hand-sorted to be delivered directly to a Board of Elections facility or to await pickup from the Board of Elections.

“We weren’t worried about the scan,” he added. “We were worried about getting to the Board of Elections on time. Our whole goal is to make it as quick and efficient as possible.”

In a statement Wednesday afternoon, USPS spokesperson Dave Partenheimer said, “The assumption that there are unaccounted ballots within the Postal Service network is inaccurate,” adding that the ballots in question “were delivered in advance of the election deadlines.” He also said ballots delivered directly to local election boards to save time as Election Day approached did not receive a final scan because they didn’t flow through regular mail processing.

But around the same time his statement was issued, a senior USPS official overseeing election mail processing was testifying in federal court on election mail issues, including about the untraced ballots, and said he would have to look into whether any ballots did not make it to their counting destination.

“I wouldn’t be surprised that there were some,” the USPS official, Kevin Bray, said, “[but] I’d be very surprised if they were in the thousands.”

Bray, who was called to testify on short notice earlier in the day, said he hadn’t seen the documents highlighting ballots that were scanned into postal facilities but not scanned out.

Partenheimer did not immediately respond to a question from Recode about why his statement definitively said there were no untraced ballots even as Bray’s remarks left open the possibility that some could have been left behind.

The case of the supposed hundreds of thousands of untraced ballots drew attention on Election Day when a federal judge ordered “all clear” checks of postal facilities in a dozen states that were intended “to ensure that no ballots have been held up and that any identified ballots are immediately sent out for delivery.”

The ordered sweeps included facilities in several swing states including Florida, Arizona, and Michigan, which do not count ballots received after Election Day, and it left open the question of whether some mail-in votes would be disqualified if not delivered by state cutoff times.

Department of Justice lawyers, representing the USPS, responded after the judge’s deadline on Tuesday, saying that regular daily sweeps were conducted in the morning and that the USPS could not move up Election Day facility reviews already scheduled for later in the day, between 4 pm and 8 pm.

On Wednesday, lawyers for the USPS said in a court filing that the Election Day sweeps were carried out and that they turned up just 13 ballots, all in Pennsylvania, that were referred to management for delivery.

At a noon hearing on Wednesday, the judge still scolded USPS leadership for failing to comply with his Tuesday afternoon deadline and threatened that DeJoy may have to testify or be deposed.

A USPS spokesperson told Recode on Tuesday that since October 29, the US Postal Inspection Service “has been conducting daily reviews at all 220 facilities that process ballots” and that “ballots will continue to be accepted and processed as they are presented to us and we will deliver them to their intended destination.”

Lawyers for the USPS said in a court filing on Wednesday that postal workers were instructed to run continuous sweeps of their facilities on Election Day and get ballots to their destination by a state’s cutoff time.

“This is super frustrating,” NAACP attorney Allison Zieve told the Washington Post on Tuesday. “If they get all the sweeps done today in time, it doesn’t matter if they flouted the judge’s order. They say here they will get the sweeps done between 4 pm and 8 pm, but 8 pm is too late, and in some states, 5 pm is too late.”

What’s clear is that the 300,000 figure is likely unreliable at best, and perhaps a vast overstatement at worst. What’s still unclear is whether any ballots at all did not make it from a postal facility to a ballot-counting center on time — and it’s not certain that there will be an answer. But there is hope, based on Bray’s testimony on Wednesday, that the USPS will provide more clarity soon.

Advisors use technology to handle challenge in helping clients adjust to...

Executive explains how technology has “improved the claims journey” – Insurance...

Poll: Most Americans want to break up Big Tech