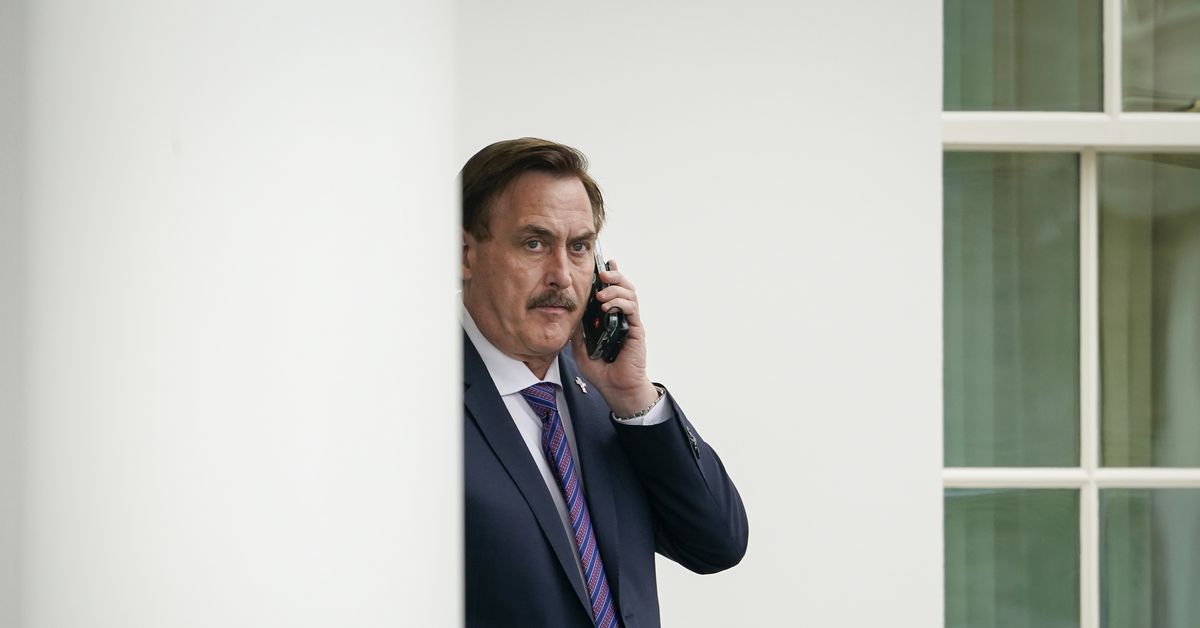 MyPillow CEO Mike Lindell has remained loyal to former President Donald Trump even as other corporate allies have jumped ship. He followed him in promoting false election conspiracies. He insisted Trump was not to blame for the Capitol riot.

And now, the MyPillow guy has followed him into another ignominy — getting himself, like Trump, permanently banned from Twitter for spreading misinformation.

In a statement to the Associated Press, a spokesperson for Twitter said Lindell was banned for “repeated violations” of the company’s civic integrity policy, though they did not point to a specific tweet that triggered the action.

Lindell has used his account to promote false claims of election fraud since November. His tweets have asked the president to “impose martial law,” called Biden’s victory the “biggest election fraud in history,” and used the days after the insurrection to continue to promote conspiracy theories.

Trump’s and Lindell’s claims of voter fraud have been thoroughly — and repeatedly — debunked. More than 90 judges ruled against Trump and his allies in their court filings over the election, and, after a thorough review, the US Justice Department found no evidence of widespread voter fraud.

For Lindell, a pillow manufacturing executive, self-professed crack addict-to-Christian success story, and devoted Trump acolyte, the Twitter ban is the latest blow in a series of consequences over his election denial. As Vox’s Emily Stewart explained, the businessman, whose commercials you’ve probably seen, has become “a fixture in Trumpland”:

Lindell is the founder and CEO of MyPillow, a company that, as the name suggests, makes and sells pillows. His shtick is that he guarantees it will be “The Most Comfortable Pillow You’ll Ever Own.” The company also makes other products — sheets, blankets, towels, dog beds, etc.

But Lindell is into more than pillows. He is also very into Donald Trump.

In getting banned, Lindell joins other Trump allies, including former White House chief strategist Steve Bannon and campaign consultant Roger Stone. Twitter has suspended more than 70,000 accounts, mostly associated with the QAnon conspiracy, in accordance with its new civic integrity policy, which states users may not use their accounts for the purpose of “manipulating or interfering in elections.”

The MyPillow guy will not abandon the sinking ship

Lindell has a long history of supporting the president, and since November, he has funded Trump’s election challenges in court, appeared at Trump rallies insisting Georgia voters would go to prison, and maintained the incorrect claim that the Trump supporters who stormed the Capitol were actually affiliated with antifa.

When Trump was losing allies after the insurrection, Lindell showed up at the White House on January 15 with six pages of notes on election conspiracies ranging from Chinese interference to Russian cybersecurity figures changing the result. An image from Washington Post photographer Jabin Botsford showed Lindell’s notes calling for the then-president to invoke the Insurrection Act and impose martial law “if necessary.”

Apparently, this may have even been too far for Trump. He met with Lindell for a few minutes and then gave him the cold shoulder by having him wait to speak to advisers that Lindell had suggested Trump fire, according to the New York Times.

Lindell’s affiliation with Trump is unsurprising given his penchant for self-aggrandizement. As The Goods’ Meredith Hagerty lays out in an explainer, Lindell considers his relationship with Trump to have been a “divine appointment,” which may explain his unflinching commitment to supporting the president up to the point of his own deplatforming:

The actual political conversion he describes took place shortly after Lindell had — yup — a dream where he met Donald Trump and the two posed for a picture together. At this point in 2015, Trump was weeks away from announcing his candidacy for president, and the men had never met, but by August of 2016, they were coming together in Trump Tower, in fulfillment of Lindell’s “premonition.” Lindell had become active in Republican circles, honored with the Federal Enforcement Homeland Security Foundation’s 2015 Patriot Award (nominated by buddy Stephen Baldwin), popping up at the National Prayer Breakfast to feel disappointed in President Obama, attending the RNC and becoming friendly with the Trump kids.

His relationship with Trump makes sense for Lindell — if ever a man was going to increase his platform it would be by aligning himself with a kindred spirit pitchman, a man with whom he shares a checkered past and evangelical overtures. In this way, it makes sense for Trump as well; Lindell has the religious bona fides.

Losing his account for this loyalty may not be Lindell’s only consequence. Dominion Voting Systems threatened to sue Lindell for defamation, after he has promoted misinformation regarding the security of the company’s machines, saying they were rigged by foreign countries. No evidence of changed vote tallies was found in any state, and Dominion has already launched a lawsuit against Trump lawyer Rudy Giuliani. Additionally, retailers including Bed, Bath & Beyond and Kohl’s have dropped MyPillow products from their stores.

Still, Lindell has remained committed to going down with the election fraud ship — even without the use of his Twitter account, which he previously told Trump was where he was finding supposed evidence of voter fraud that the former president was missing because he had been banned from the site.

In an interview with the Minneapolis Star-Tribune Tuesday (the MyPillow company is headquartered in Minnesota), Lindell said he would not be silenced by Twitter CEO Jack Dorsey, by lawsuits, or by retailers.

“I want to get sued by Dominion because then both sides have to show in court … Dominion’s lawyers are not going to bother me because they know I have all this [evidence],” Lindell said. “My support of Donald Trump has never wavered since the time I met him and it never will. Never ever, ever.”

Every day at Vox, we aim to answer your most important questions and provide you, and our audience around the world, with information that empowers you through understanding. Vox’s work is reaching more people than ever, but our distinctive brand of explanatory journalism takes resources. Your financial contribution will not constitute a donation, but it will enable our staff to continue to offer free articles, videos, and podcasts to all who need them. Please consider making a contribution to Vox today, from as little as $3.

Who Are the Biggest Influencers on Clubhouse?

Every country wants a covid-19 vaccine. Who will get it first?

Russia’s FireEye Hack Is a Statement—but Not a Catastrophe