Co founder and managing director of agtech company Cibo Labs, Phil Tickle, believes the increased uptake is partly due to the fact technologies had reached the aspirations of what people wanted.

“We are starting from a pretty low base in terms of technology adoption relative to other sectors in the agriculture area, but what we’re also seeing is the uptake is ramping up at a much faster rate than a lot of the other sectors now as well.

“You look at Beef week, previously there was only a handful of agtech providers in their, then this time round there were a couple of sheds full of them.”

Mr Tickle will be presenting on behalf on Cibo Labs at the upcoming Cloncurry BeefUp Forum in October.

There are now more than 500 properties engaged in their program with around 4500-5000 pasture sites installed.

“The business is focusing on the northern cattle industry at the moment but we’re gradually moving south and getting to the point now where we’ve got economies of scale,” Mr Tickle said.

“We’ve got a system we’ve developed where we’ve got people collecting data on the ground continuously, a high performance computing model where we process the imagery, and then deliver the estimates of kilograms DM/ Ha for every paddock.” 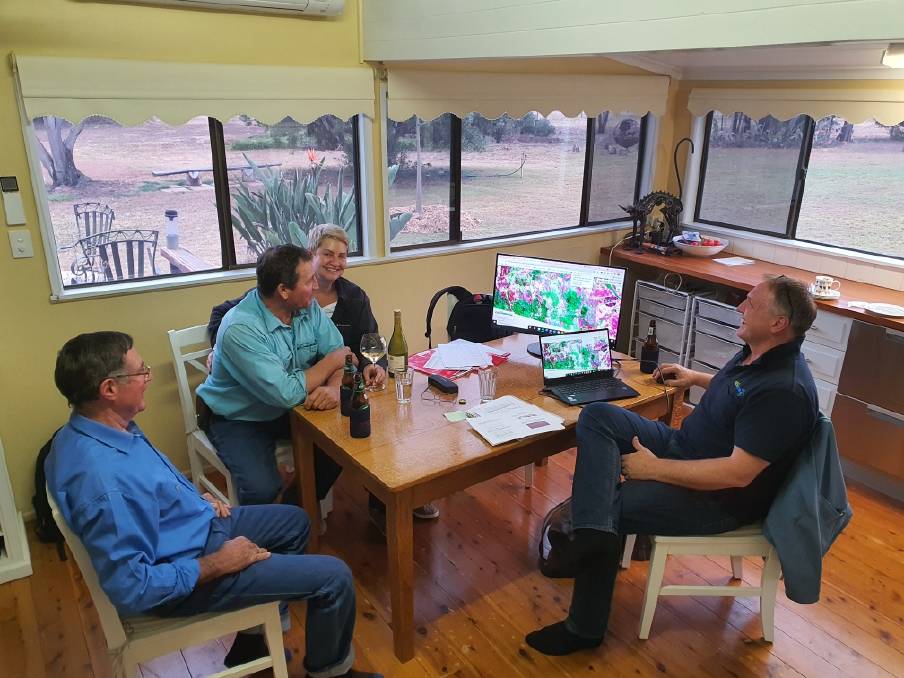 Forage Budgeting in 2021- Ian Stark and Jeanne Seifert, sitting at the kitchen table on a rainy afternoon on their 3500ha ‘Wonga’ Jandowae property and assessing the feed they have on offer at their 6000ha property at Chinchilla with grazing consultant Col Paton, and Phil Tickle from Cibo Labs.

Mr Tickle said the satellite imagery combined with the on ground data provide landholders with a more objective approach to monitoring and managing their feed base.

“When you look across a paddock it always looks like there’s more feed than there is. The satellite provides a much more synoptic and objective view of the actual pasture variability,” he said.

“Being able to objectively compare this year from the last and the decisions you were making helps prepare you for risk going forward and allows you to manage and adjust stocking rates accordingly.”

Mr Tickle said while there was a large number of agtech service providers and products, it was pleasing to see collaboration.

“For example, we work really closely with another company who are providing individual animal and mob based software systems and our information feeds straight into their system so the producer doesn’t have to have 10 apps open,” he said.

Cibo Labs have also partnered with Ceres-Tag, who will also be presenting at the upcoming BeefUp forum in Cloncurry.

“Through this partnership we’ve now got the ability to do real time monitoring of the individual animal activity and location with GPS based ear tags, and also monitoring the feed base,” he said.

“Looking at individual and mob based animal based movements across days to weeks to months and the looking at how that relates to the feed base and pasture utilisation.

“With this convergence, and then the integration of those technologies, it’s making it far more attractive for producers to benefit from.”

In the current climate, Mr Tickle believes producers that can demonstrate their productive capacity and their sustainability are going to be in a much better position going forward, particularly in terms of accessing finance.

“When you are putting in an infrastructure plan, as far as finance is concerned you can estimate how many kg/ha of dry matter is going to be made accessible,” he said.

“You can go to your bank and say ‘We’re installing this many water points, which will make this many kilograms of DM/ha available to our cattle, and that’s what it’s going to mean for my bottom line in terms of increasing production.”

Mr Tickle said with the ability now to be able to be monitor properties and report on sustainability through satellite assisted forage budgeting technology, it creates greater transparency right down the supply chain from the paddock to the box.

‘By measuring ground cover dynamics, land condition trends and pasture utilisation producers are able to demonstrate to consumers that they’re managing their property well,” he said.

Want daily news highlights delivered to your inbox? Sign up to the North Queensland Register newsletter below.

When to incorporate design thinking in scrum

You can’t escape Pulumi and other IaC tools

It’s getting harder for people to believe that Facebook is a...