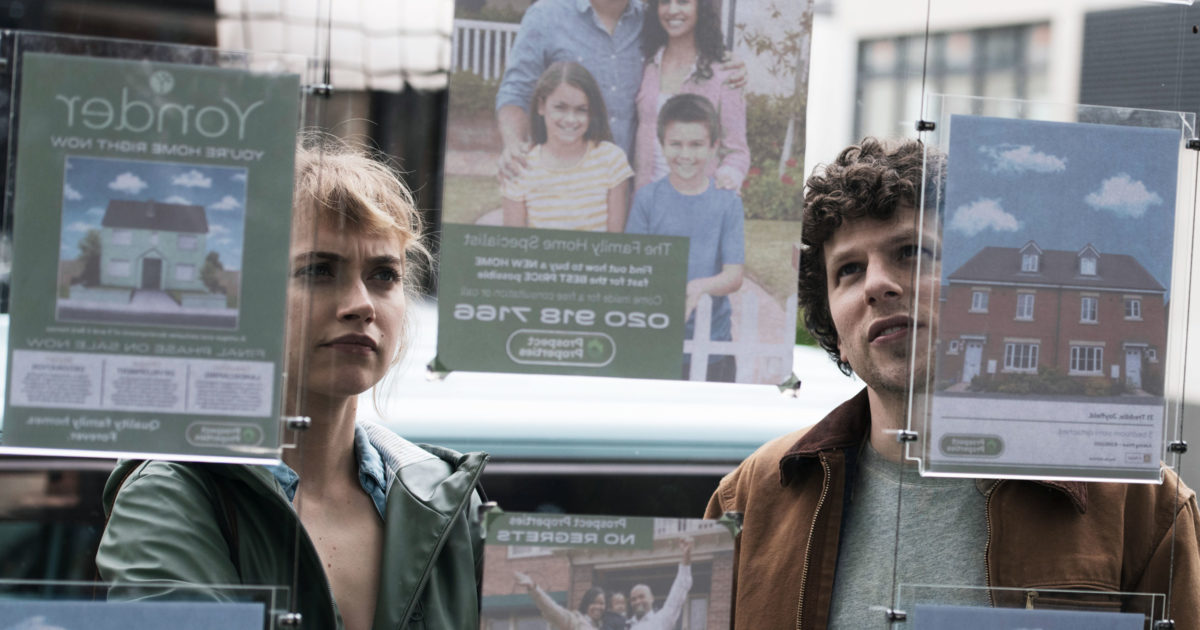 Hollywood movies usually depict the suburbs as a place of conformity and dark secrets. Horror author Grady Hendrix says this is particularly true of 1980s films like Poltergeist and A Nightmare on Elm Street, which critique the idea of the suburbs as being clean and new.

“I think Poltergeist and Nightmare on Elm Street are both movies that say, ‘No, history doesn’t begin where you say it begins. There are crimes in the past that have been buried,’” Hendrix says in Episode 428 of the Geek’s Guide to the Galaxy podcast.

Science fiction professor Lisa Yaszek says that suburban life has always been a particular source of anxiety for women. “I know from my own research that in the 1950s, women who were writing science fiction, absolutely one of their favorite topics was the horror of suburban life for women,” she says. “And then Ira Levin, who wrote The Stepford Wives, is sort of laddering off that moment in science fiction history.”

The recent movie Vivarium, in which a young couple is forced to raise an alien child, also takes a dim view of the suburbs. Geek’s Guide to the Galaxy host David Barr Kirtley wonders if all this satire is getting a bit stale.

“I just feel like there’s been half a century or more of reinforcing this message that the suburbs are sterile and conformist,” he says. “Does anyone not know that by now? Do we need to keep reinforcing that point?”

Part of the problem may be that pop culture depictions of the suburbs seem mired in the past. Science fiction author Anthony Ha wishes more movies would engage with the increasing diversity of suburban life. “I would love to see—and maybe this exists and I just haven’t seen it yet—but I would just love to see more suburban horror that actually reflects contemporary suburbs and how they’ve changed, rather than this imagined ’50s suburb,” he says.

Listen to the complete interview with Grady Hendrix, Lisa Yaszek, and Anthony Ha in Episode 428 of Geek’s Guide to the Galaxy (above). And check out some highlights from the discussion below.

“The second act ends where the Imogen Poots character is starting to mother the child. … She looks at him at some point and says, ‘You’re a mystery, and I’m going to solve you.’ And it’s almost like the Jesse Eisenberg character is becoming the villain, and the allegiances between the characters are shifting. And then I felt like that thread kind of got dropped, and the ending that we got—in the third act—I found perfectly satisfactory, but it didn’t blow me away. I was left with the feeling that there was some more interesting ending, delving deeper into these characters somehow, that was left on the table.”

Grady Hendrix on The ‘Burbs:

“During the Satanic Panic, one of the big pushbacks against it—and rightly so, but I thought it was a weird angle to take—was ‘It’s just a bunch of bored housewives with too much time on their hands. They’re imagining Satan everywhere.’ This idea that if you have enough free time, you’re going to just start rounding people up and killing them. And that’s the whole thing with The ‘Burbs. Tom Hanks takes a vacation, and he can’t handle the free time. He has to do something with it, so what does he do? He’s a red-blooded American male. He decides that these other people are different and dangerous, and need to be destroyed.”

“It’s one of the cultural touchstones that I’d missed, and I have to say that I was not crazy about it. I thought that thematically it was really rich, and I thought all the performances were fine, and individual scenes were mostly well done. It may just be this curse of knowing the basic plot of the film that made it really hard for me to watch, because I just know the whole time that they’re replacing all the wives with robots, and the whole movie is about gradually building your awareness that that’s what’s happening. So you just kind of want to be shouting at the television, ‘No, no, no. It’s robots! It’s robots!”

Lisa Yaszek on the Twilight Zone episode “The Monsters Are Due on Maple Street”:

“What’s really interesting is to think about not just the original, but also the 2003 remake, which was right after 9/11, and is really a very interesting remake. Because instead of it being aliens screwing with us, it’s the government purposely running a test on people. The trigger is they drop a family of color into a white neighborhood, and it all proceeds from there. So this time the ‘monsters’ are this Middle Eastern family, but it’s really our government trying to manipulate people’s raced feelings about things in the suburbs. … The remake is definitely targeting the racism that was directed at Middle Eastern people after 9/11.”

Poll: Most Americans want to break up Big Tech

How Technology Can Kickstart Travel’s Post-Pandemic Boom – Built In

The Genome of Your Pet Fish Is Extremely Weird