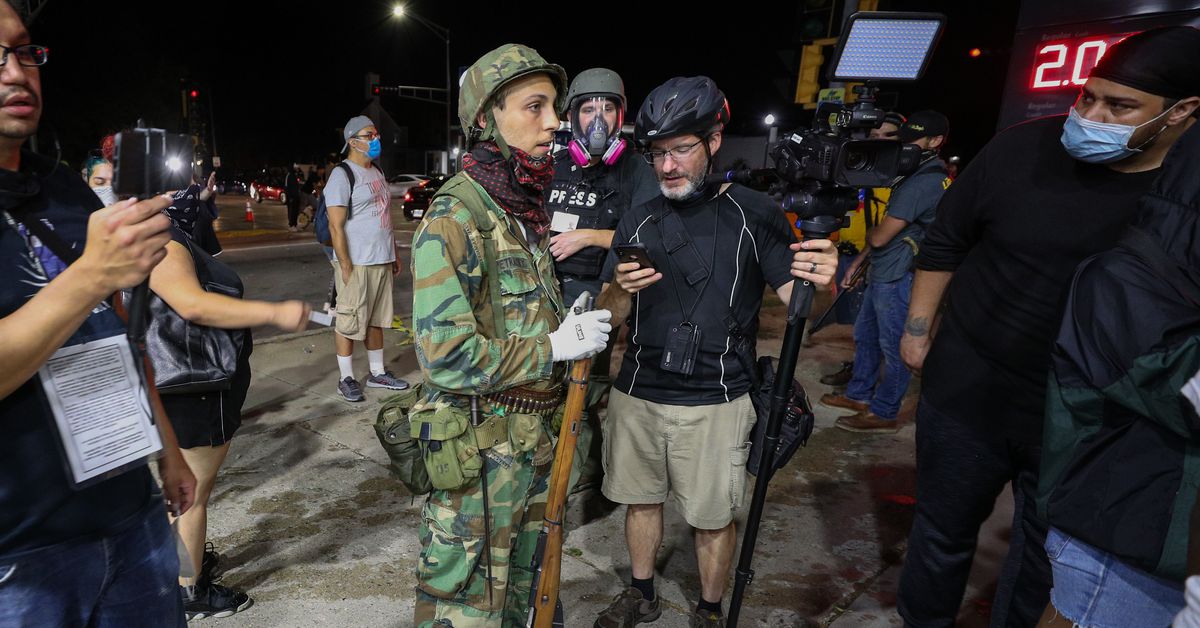 Facebook didn’t take heed when its users sounded the alarm about a militia group issuing a “call to arms” on its platform. That call to arms came before the violence in Kenosha, Wisconsin, on Tuesday night, which left two people dead and one injured, according to a new report. A man who has been arrested as a suspect in the shooting reportedly self-identified as a militia member, though he was not a follower of the Facebook page users had flagged.

Before the shooting, at least two Facebook users flagged a page called “Kenosha Guard” for inciting violence, according to The Verge. But the company told users that the page did not meet the company’s criteria for removal. On Wednesday morning, after violence at the protests already broke out — and armed militia groups took to the streets — Facebook ended up taking down the page for violating its policies on dangerous groups.

Just last week, Facebook expanded its Dangerous Individuals and Organizations policy to include domestic militia groups that encourage violence. But in spite of those recent efforts, it seems that some of the content and groups the company has deemed dangerous under this new policy are still slipping through the cracks.

Facebook told Recode that it may have rejected users’ requests to take down the Kenosha Guard militia page because those requests weren’t initially routed to the right team. Once Facebook’s newly formed specialized team working on identifying dangerous militia groups looked at the group, the company said it took the page and a corresponding event down.

Facebook also said the shooting suspect, 17-year-old Kyle Rittenhouse, was not a member of the Kenosha Guard Facebook page or invited to the associated event. The company says it has removed Rittenhouse’s accounts on Facebook and Instagram.

Regardless of Facebook’s eventual removal of the militia group, some groups are criticizing the company for not taking action sooner — saying the situation is part of a larger pattern of not responding quickly enough to calls to violence on its platform.

“This crisis of hate-fueled violence requires immediate, drastic action from Facebook and all other platforms on which these groups gather,” said Rashad Robinson, president of the civil rights group Color of Change, in a statement to Recode. “Facebook’s superficial policy changes mean nothing when they aren’t enforced.”

This week, demonstrators in Kenosha have taken to the streets to protest the police shooting of Jacob Blake, a 29-year-old Black man who witnesses at the scene said was unarmed and was simply trying to break up a dispute. Tensions have increased at these protests as armed militia who say they support the police have showed up to counter protesters.

Facebook has struggled many times in recent years with how to deal with extremists and other groups associated with violence, who often use its platform to organize and build out their groups.

Back in 2017, Facebook was criticized for letting the white supremacist Unite the Right Rally, which resulted in three deaths and dozens of injuries, keep its event page online for a month before it was taken down the day before the event. More recently, members of the far-right Boogaloo movement have attempted to organize violent insurrections against members of the US government on Facebook, such as plotting the murder of a federal agent in Oakland, California.

In the past few months, Facebook has expanded its policies to restrict dangerous groups even if they are not overt terrorist organizations, including domestic militias, members of the Boogaloo movement, and supporters of the conspiracy theory QAnon.

But Facebook’s delay in taking down the Kenosha Guard page shows that enforcing its new policies will be complicated and imperfect — after all, these groups have built themselves in part by using its platform.

In the spring, we launched a program asking readers for financial contributions to help keep Vox free for everyone, and last week, we set a goal of reaching 20,000 contributors. Well, you helped us blow past that. Today, we are extending that goal to 25,000. Millions turn to Vox each month to understand an increasingly chaotic world — from what is happening with the USPS to the coronavirus crisis to what is, quite possibly, the most consequential presidential election of our lifetimes. Even when the economy and the news advertising market recovers, your support will be a critical part of sustaining our resource-intensive work — and helping everyone make sense of an increasingly chaotic world. Contribute today from as little as $3.

Spaceflight does some weird things to astronauts’ bodies